Fr. Sravan Kumar Reddimasu (Kumar) was born on July 24th, 1981, Telangana State in India. He is third of four children (two boys and two girls). Fr. Kumar grew up in a traditional family of Catholic faith. He has done entire education in Roman Catholic Schools. In 1999 He went to Seminary to study and be ordained for the Catholic Diocese of Nalgonda. On April 24, 2008 he was ordained a Catholic Priest.

Fr. Kumar came to the Diocese of Wheeling-Charleston in June 2016 and assigned to St. Vincent De Paul, New Martinsville. On February 1st 2017 He was appointed as a Catholic Chaplin to Ruby Memorial and Mon General Hospitals in Morgantown, Residence at St. John’s University Parish, Morgantown. Now he is an administrator in our family of Faith, Our Lady of Perpetual Help, Stonewood. 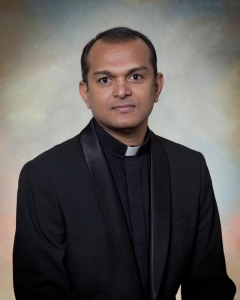