It has the quality and feel of Father Robert Barron’s elaborately produced Catholicism series, the orthodoxy of JPII-generation teachers and the spirit of the New Evangelization. Its name links the early Church to today’s faith.

Symbolon is the new faith formation program produced by Edward Sri of the Denver-based Augustine Institute. Subtitled “The Catholic Faith Explained,” the program presents the faith with a series of high-quality videos and guides. Its somewhat cryptic name is an ancient term referring to the creed. And like the creed, it’s a good summary of the faith—and then some. 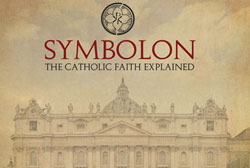 “A symbolon was something from the ancient world, used to describe a token, for example a clay seal that could be broken in half, and when put back together it confirmed a relationship,” Sri explained. “So let’s say I wanted to leave a deposit of money with you at the bank. We’d take a seal, break it, and when I came back a year later to claim my deposit, how do you know it’s really me? We’d match it up together, and it shows who I am and confirms my identity and our relationship.”

The early Christians chose this Greek word to refer the tenets of their faith, Sri explained. “How does one know if I’m an authentic Christian? How do I know if I’m really following the teachings of Christ and the apostles? I would profess that symbolon—the summary of the faith, the creed. They called it a symbolon because it does what a symbolon did: it shows my identity—this is who I am—that I believe these things, that I believe in Jesus, the Father and the Holy Spirit, the Church. And it also confirms my relationship with all the other believers in the creed.”

The symbolism of the word works well today, when many people, in Sri’s estimation, have a “fragmented understanding of Catholicism.”

“They may know there are Twelve Apostles, Ten Commandments, seven sacraments, but they have zero understanding of how it all fits together and what difference it makes to their lives,” he said. “We wanted to build a program that would tie all the different aspects of the faith together so that people will know their faith and then understand practically how to live it and be able to articulate it for someone else.”

In fact, Sri said, Symbolon was conceived when certain bishops suggested to the Augustine Institute “the great need for better resources for RCIA and better training for RCIA.” Sri pointed to a study showing that one out of three people who go through RCIA in the United States stop going to Mass within a few years.

“We really used the history of our Church, the beauty of the churches in Rome, the stories of the saints in Rome, to help tell the story of the faith,” Sri said. “Originally it was for RCIA, to help present the deposit of the faith to those going through RCIA in a very engaging, attractive way, one that would lead them through the various stages of conversion. But as our advisors showed us, what we were developing also mapped out to what parishes need for adult faith formation because many adult Catholics today have to go through those same stages of conversion. Pope John Paul II said that many adult Catholics today are quasi-catechumens. They may be baptized; they may show up at church every Sunday; they haven’t had that process of conversion in their lives where they surrender their lives to Christ and really look at the world and their lives in a Catholic perspective. So this is an instrument we see that is being used in so many more ways than we imagined.”

“It really inspired us to want to do something that uses the beauty of the tradition and beautiful cinematography to help tell the story of the Catholic faith,” he explained. “It doesn’t just tell you about the faith, it shows you the faith.”

The Augustine Institute’s ultimate aim, though, is not to be admired as award-winning filmmakers, but to advance the New Evangelization.

“We wanted to give participants something they can take home, chew on, go deeper,” Sri said. “But most of all we really wanted them to encounter Jesus in prayer, discussing with the Lord the actual topics we’re talking about. For example, when we teach divine revelation, we discuss Scripture and tradition and the Magisterium, but also reflection questions they can take to prayer that invite them to ask, ‘How much do I allow God’s revelation to really be the standard for my life? When I think about what makes me happy or what a successful life is, how much of a world standard influences me rather than Scripture and tradition?’”

With reflection on these and other questions, the parts of the broken seal—the symbolon—will be put together.

The RCIA is a faith process to initiate adult candidates into the spiritual life of the Roman Catholic Church.

The RCIA program is for adults un-baptised, baptized, or non-Catholic Christians who seek full communion with the Catholic Church, as well as baptized, but uninstructed Catholics.

If you are interested in the Catholic Faith and wish to learn more about the Our Lady of Perpetual Help RCIA program, please contact Deacon John at [email protected].  He will be glad to answer your questions.